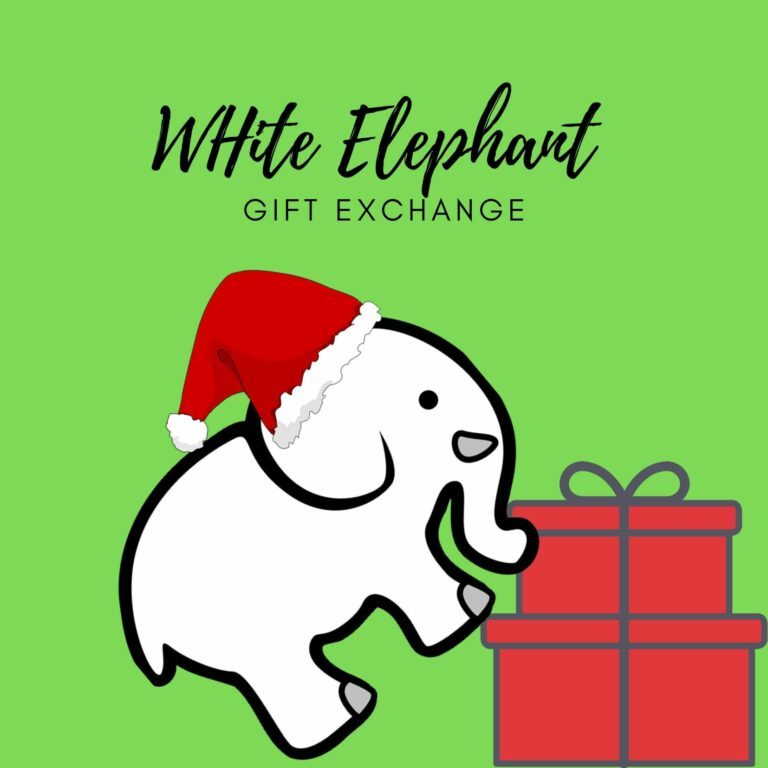 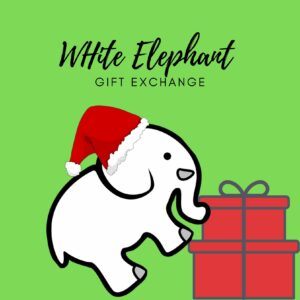 What is the White Elephant Gift Exchange?

The White Elephant Gift Exchange is a fun and popular party event, usually around Christmas, where each person brings a present to add to a pile of gifts for gift swap. This post will focus on the white elephant gift exchange directions.

People (your guests) take a number, and then one by one pick from the pile of presents when their number is called. Usually it is funny, a bit wacky, and enjoyed by all. Depending on the host’s preferences the game can have a number of varying rules.

Over time it has been called by many names. My family calls it “Tied N Dyed” (More on that later).

1. Every person carries one gift to add to the community pile.

Typically, the host needs to explain the rules before the game. Invitations with the gift rules should be given prior to the party date. This allows people to plan their gift accordingly.  (More on this later in the post.)

In my family’s version, we always add a few extra gifts in case someone forgets or brings a last-minute guest.

2. Then everyone draws numbers (out of a hat is perfect) to determine in what order they will pick a gift. The game is made more fun by making the order of whos turn it is,  random!

3. The person who has the first number then selects a gift and shows it to the crowd.

4. The next number (2) now has the choice of picking from the pile or “stealing” the first gift opened from the first player.

If the second person choses from the pile they open the gift and then it becomes the thirds persons turn.

If they chose to “steal” the gift from player 1, it becomes player 1’s turn again and they chose a new gift. (They are not allowed to “steal” anymore that turn. A new gift must be picked.) Then it is the 3rd person’s turn.

The 3rd person now has 3 choices. They can open a new gift, or “steal” from player 1 or 2. This continues for the life of the game!

5. Gift can be passed up to 3 times before it is officially safe and discontinued from the Game.

The White Elephant Gift Exchange Directions have one optional additional rule that can be followed.

After all players have had a turn, the first player gets a chance to swap the gift he or she is holding for any other opened gift. (We do not use this variation as there are usually too many people and the game takes about 3 hours as is or longer. (We eat, drink, and chat, and laugh the whole way through!)

If there will be kids at the party it might be a good idea for them to have their own gift exchange. This can be beneficial as it gives them something to play with during the game.

This is usually the part that changes from party to party. The host decides what type of gifts to bring.

Re-gift: A new but unwanted gift.

Regift 2: Find something in your house you don’t use. (You need to be specific here because sometimes people bring broken things which could actually be a part of the game, but not always. This could end up being a disaster especially if there are kids in the room.)

Must be DIY gift

It All Started With An Ugly Scarf

I promised to tell the story behind “Tyed N’ Dyed” and it all started with an ugly scarf.

My grandmother received what she called the ugliest tye dyed scarf she had ever seen for Christmas. She kept it until the following year and re-gifted  the scarf to another family member.

Unbeknownst to my grandmother, the family member also disliked the scarf and kept it until the next Christmas. She too re-gifted the scarf.

This continued for years until it became the family tradition.

At one point it was even  gifted to friends, but the scarf always found its way back!

As a grown women and military wife, my grandmother was invited to many and held many receptions and parties.

Missing her family and even the silly scarf ,  the idea of  a “Tyed N’ Dyed”  party came in to existence .

It eventually became the official name of the annual family (and extended family) Christmas party. This party has grown to over 50 guests!

Random and Obscure Holidays To Make Your Week More Fun!

Questions or Comments? Leave your reply below!